What is Factory Design Pattern?

Let’s suppose, I am a customer of the shop, where I arrive to buy soap. I ask the shopkeeper for either a Hamam soap, a Rexona soap or a Lux soap. The shopkeeper analyses my request and based on my request; he decides which soap needs to be returned. Here the shopkeeper is acting like a Factory. 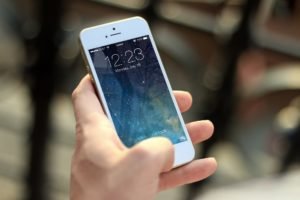 Let’s suppose, I am a phone manufacturer, and I am looking for Operating Systems (OS) for various phones, but I don’t have any knowledge about a suitable OS for a particular phone. I will contact an OS factory for that. If I ask for an OS of an iPhone, OS factory would analyze the request and return the iOS, which is the recommended OS for iPhone. If the next time, a phone manufacturer approaches OS factory for an Operating System for a Samsung mobile, the OS factory will know that since the request is for Samsung, the suitable return will be an Android OS. Similarly, if the phone manufacturer asks for an OS for a Nokia phone, the OS factory would return the Windows OS based on the client’s recommendation. Here the phone manufacturer isn’t aware of the creational procedure of the OS because the object creation is hidden from him. It’s the responsibility of the OS factory to provide a suitable OS. Here the OS factory will act as a Factory where the object creation is done using the input like iPhone, Samsung, Nokia. Based on the input the best object will be returned. 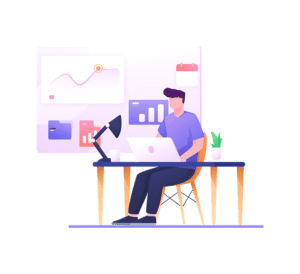 If you are working in a software company, you’d have noticed this kind of a scenario. Let’s suppose; I have two clients, a Bank client and some owner of a small-scale shop. First, the bank client approaches the manager and asks for the best UI developer available for a contract purpose. The manager analyzes the resources that are the UI developers and picks the best option for the client’s objective. Now the small shop owner approaches and requests for a UI developer in a limited amount of money. Here the criterion is UI developer in less money. The manager will analyze the request based on this criterion and picks the suitable option. In this example, the clients don’t have any knowledge about the UI developers. They are requesting the manager for a UI developer suitable for their criteria. The manager here acts as a Factory.

When to use Factory Design Pattern?

The factory design pattern is used when we have a superclass with multiple sub-classes and based on the input; we need to return one of the sub-class.

Treat VegFood, NonVegFood, and ItalianFood as three classes whose superclass is Food.

If a customer asks “Veg” then Factory method would return the “VegFood” class. 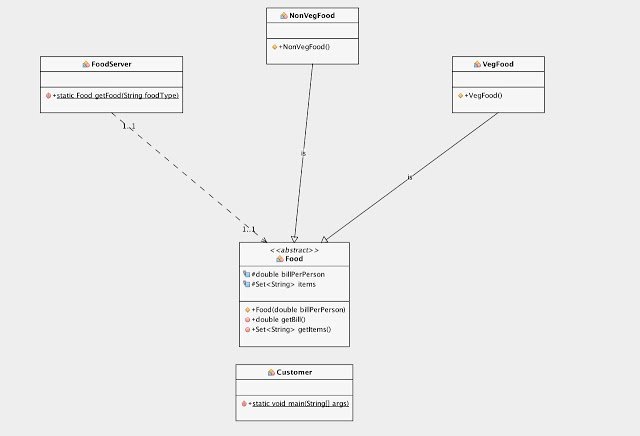 Step 3: Create a FoodServer which is a Factory class to create an object for concrete based on the information

Step 4: Main class "Customer" to get the required Food based on the food type

Play Video
Play Video
Note The above videos are in Tamil and Telugu languages also. You can watch these videos on YouTube by clicking the below links.